Skip to content
Today I have a number of color comparisons for the new Zoya Fall colors. Are they too similar to something you already own? Let’s take a look.
First up is Zoya Charli of the Focus Collection 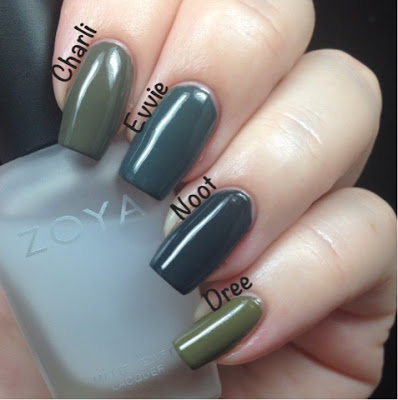 Zoya Charli vs Zoya Evvie vs Zoya Noot vs Zoya Dree
The only two that are even similar here are Zoya Charli and Zoya Dree, but Dree is much brighter with yellow undertones whereas Charli has taupe undertones.
Next is Zoya Lidia of the Focus Collection 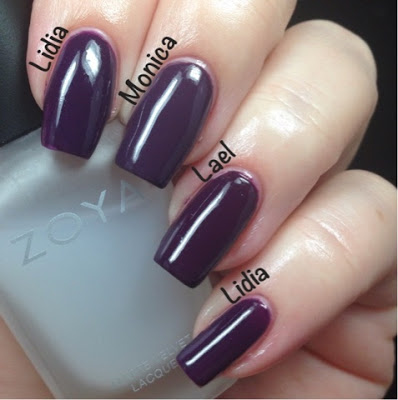 Zoya Lidia vs Zoya Monica vs Zoya Lael
Zoya Lidia and Zoya Lael are very close, Lael leans slightly more red toned whereas Lael leans more eggplant. The differences are more pronounced to the eye than they come across in photos though. Zoya Monica is more blue toned with a soft dusty feel to it whereas Lidia is    a more rich vibrant color. If you have Lael you could skip Lidia, but Monica and Lidia are different enough to justify both (at least for me they do.) 🙂
And lastly for the Focus Collection we have Zoya Sia.
The question on everyone’s mind; is Zoya Sia a dupe for Zoya Progressive Blue? The short answer: No 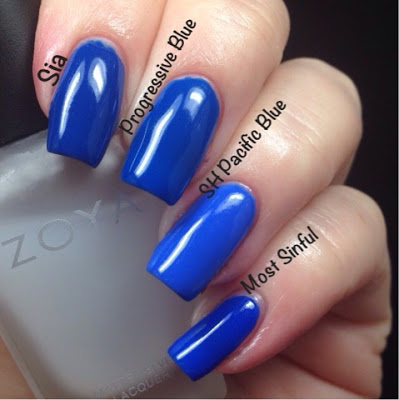 Zoya Sia vs Zoya Progressive Blue vs Sally Hansen Pacific Blue (Original) vs Sinful Shine Most Sinful
Sia and Progressive Blue are similar, but definitely not dead on dupes. Sia is very much a true royal blue, where as Progressive Blue has some teal undertones. And keep in mind the differences are a little more pronounced to the eye than they are to the camera (blues are notoriously difficult to capture.) And since Zoya is so short on blue cremes I chose 2 other popular blues. Sally Hansen Pacific Blue is quite a bit lighter than any of these, and actually appears washed out in comparison. Finally Sinful Shine Most Sinful is close to both Sia and Progressive Blue, but closer to Progressive Blue. (Again difference more pronounced to the eye.)
Now we have Zoya Tris of the Flair Collection 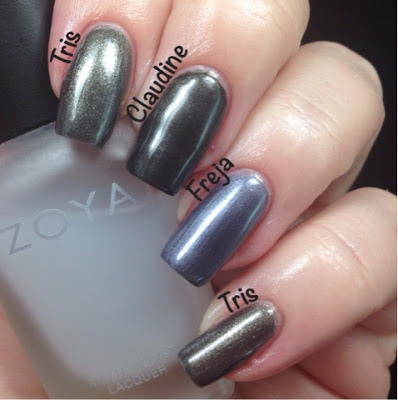 Zoya Tris vs Zoya Claudine vs Zoya Freja
Not even really close with any of these.
And Finally Zoya Estelle of the Flair Collection 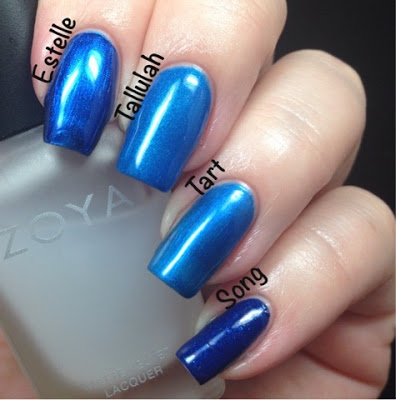 Zoya Estelle vs Zoya Tallulah vs Zoya Tart vs Zoya Song
Nothing very close here either (except for Tallulah and Tart!) Zoya Song is quite a bit darker than Estelle and the finish is very different as well. I will also mention that Estelle’s formula is far better than the rest.
I hope this has helped you make your decisions. If there are other comparisons you just have to have let me know in the comments below.
Until next time, stay polished! 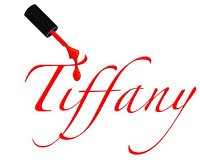