Skip to content
Continuing a week of nail art for The Digit-al Dozen. The Digital Dozen is a small group of highly skilled bloggers and nail artists who do 5 themed manis each month. The theme for February is ‘Mythical Creatures’ and for today’s mani I went with a Dragon. I had a dragon planned for weeks but when I took a closer look at the full dragon image I was going to use I wasn’t real happy with it. So I turned to Pinterest at the last minute and found all sorts of great inspiration! 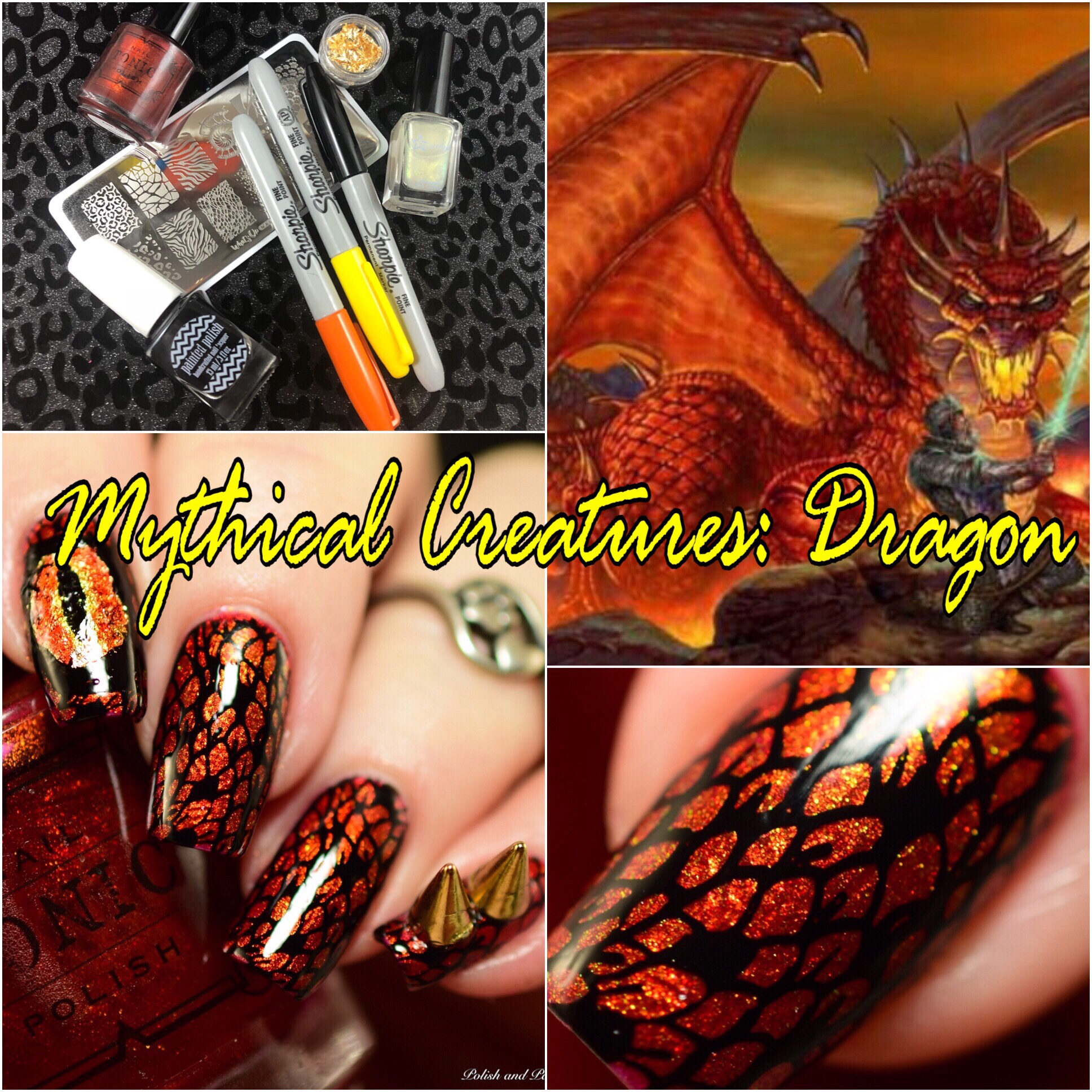 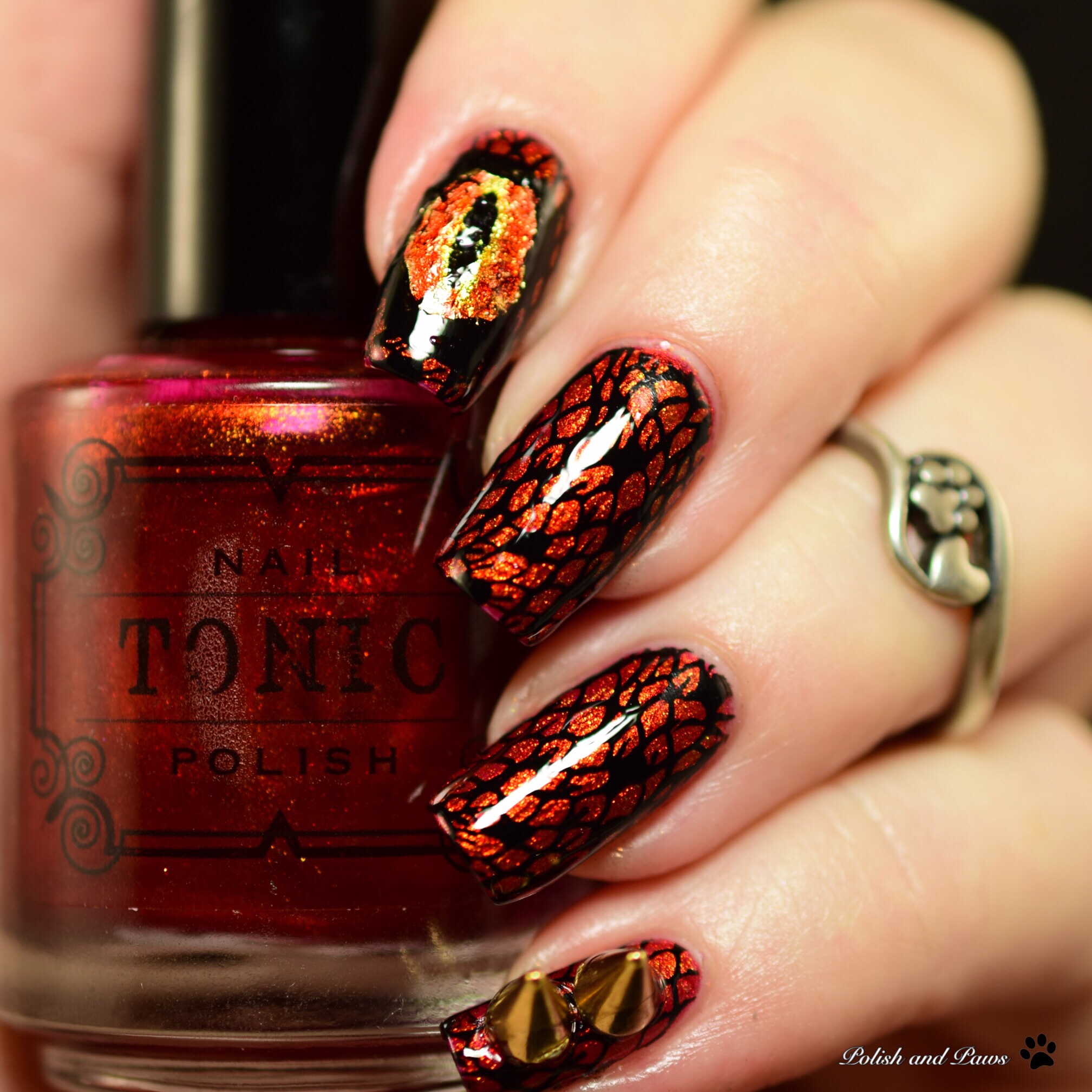 I started with base color Tonic Polish Lava Lust, it was the perfect glowy orange-red I was imagining for this dragon. I then topped it with Starlight Polish Dragon from the Mythological Topcoats line. It gave the base an extra gold-green sparkle, and I would obviously be remiss to not use it! To get the dragon skin finished I used an image from my new What’s Up Nails plate Animalistic Nature. Then I had an epiphany about the dragons tail. I have a whole helmer drawer of nails charms and studs and remembered these crazy spikes that I got in a pack of miscellaneous nail studs years ago. If you had told me 3 years ago I would ever have a use for them I would have laughed. But low and behold I finally actually needed them, and dare I say this mani wouldn’t be the same without! 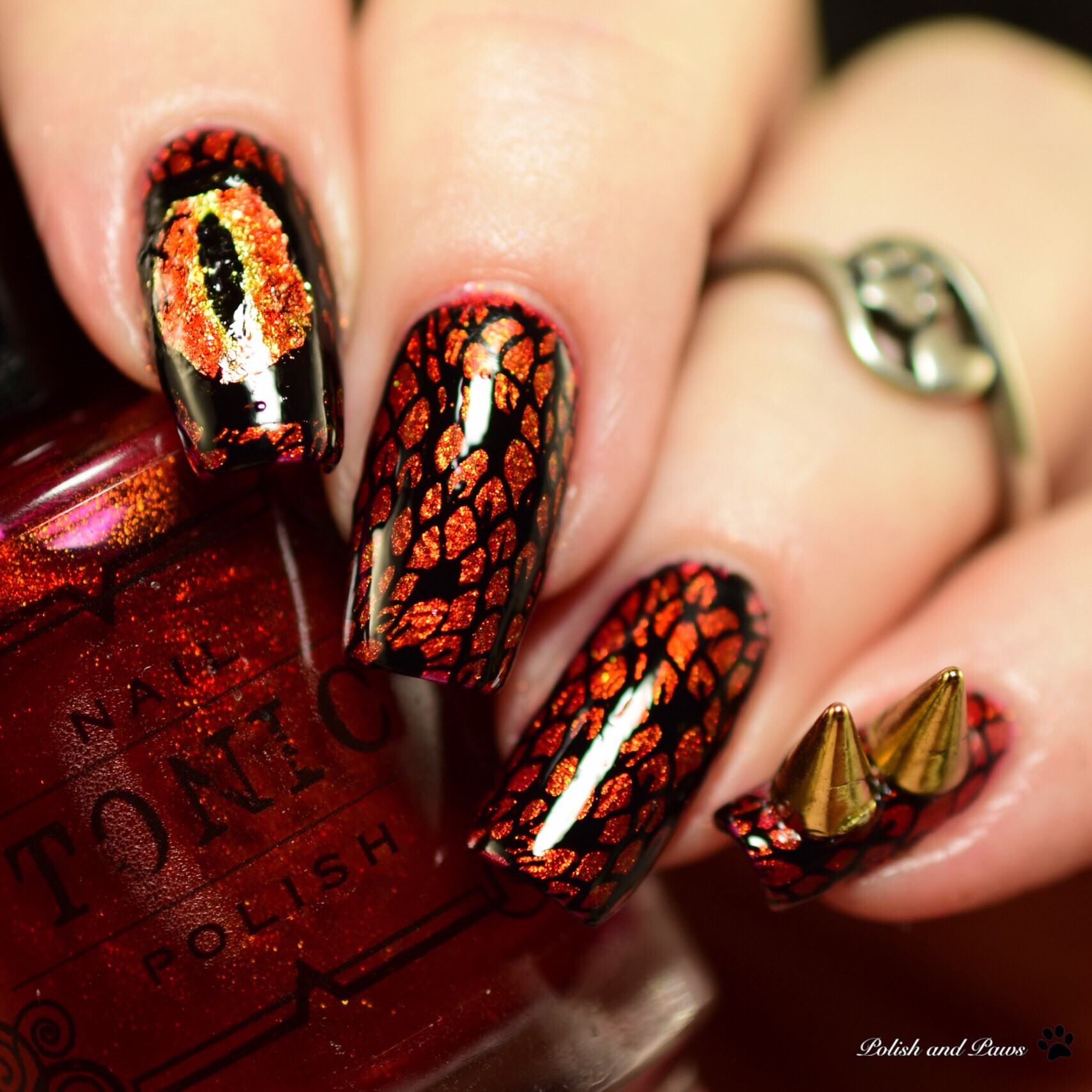 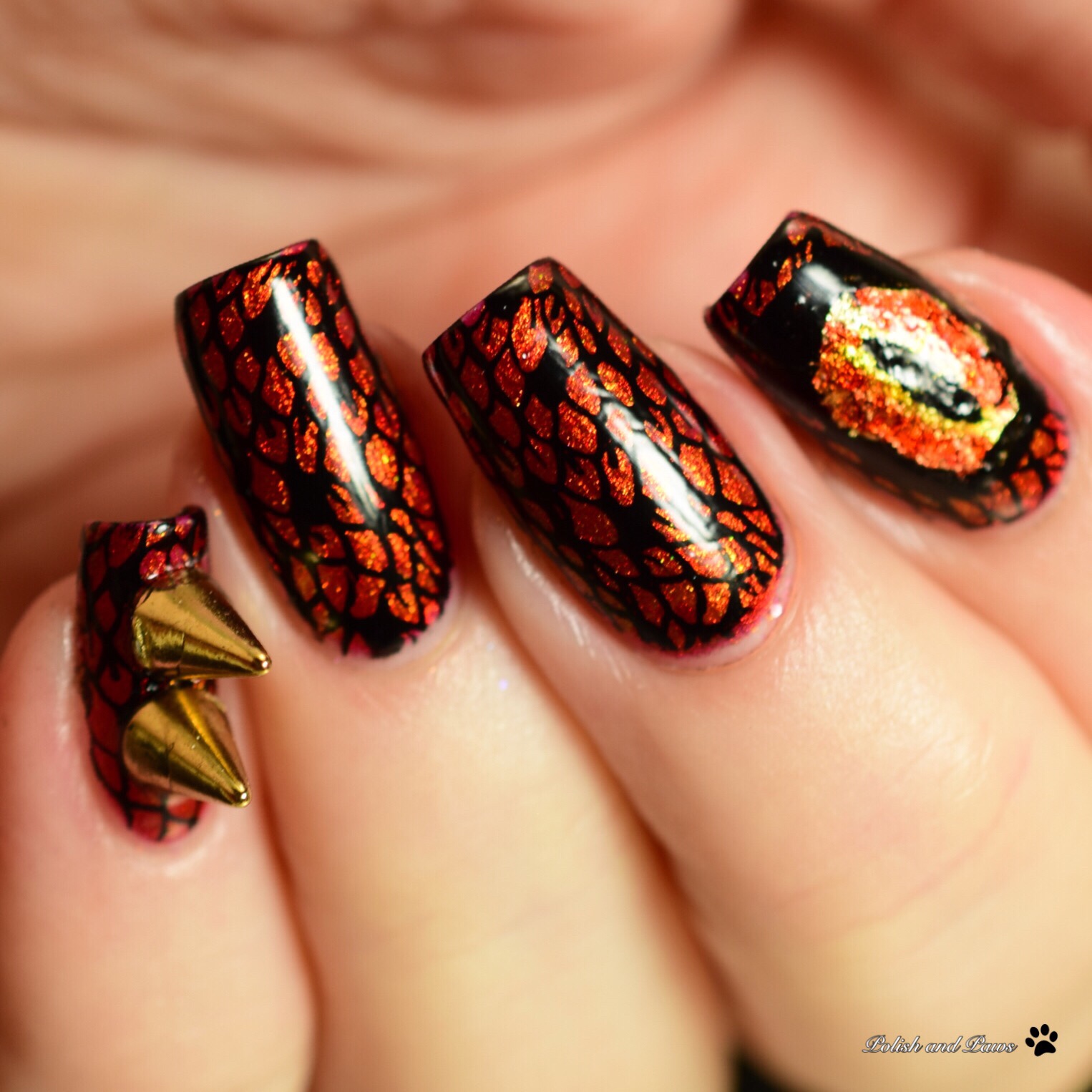 I know what you’re thinking.. you want to know how I did the eye. I got the idea from a Pinterest photo and followed along somewhat loosely. But it definitely was not my original idea. I just wish I was that creative! I placed a bit of gold foil on the nail and applied a layer of top coat. I then outlined the foil with a bit of black polish. I used sharpies and isopropyl alcohol to create some alcohol inks. I colored in the gold foil with yellow for a brighter color, then added some orange around the edges. I added the black slit in the eye with a black sharpie and finished it off with another layer of top coat. Isn’t it just wicked cool?! 😎👁 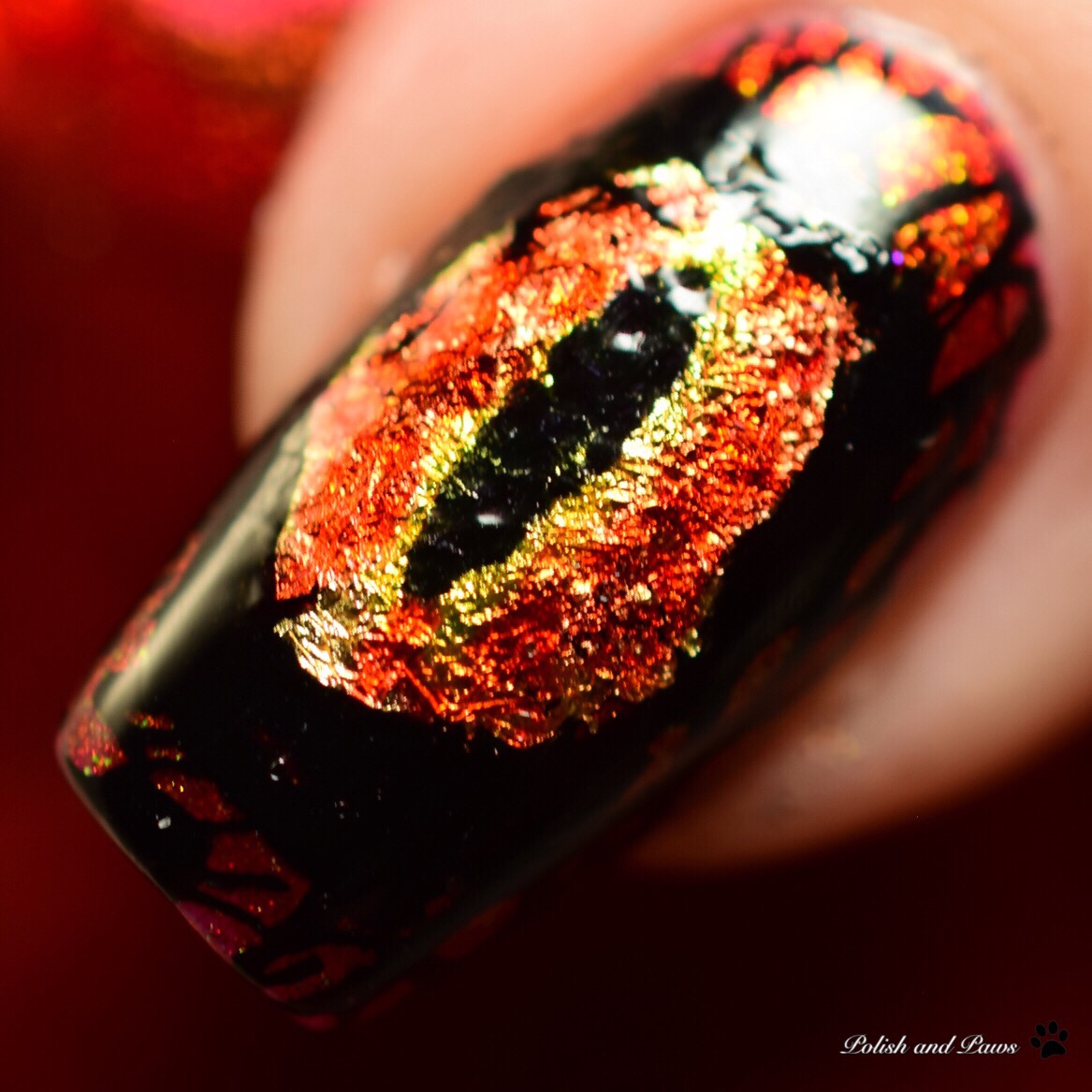 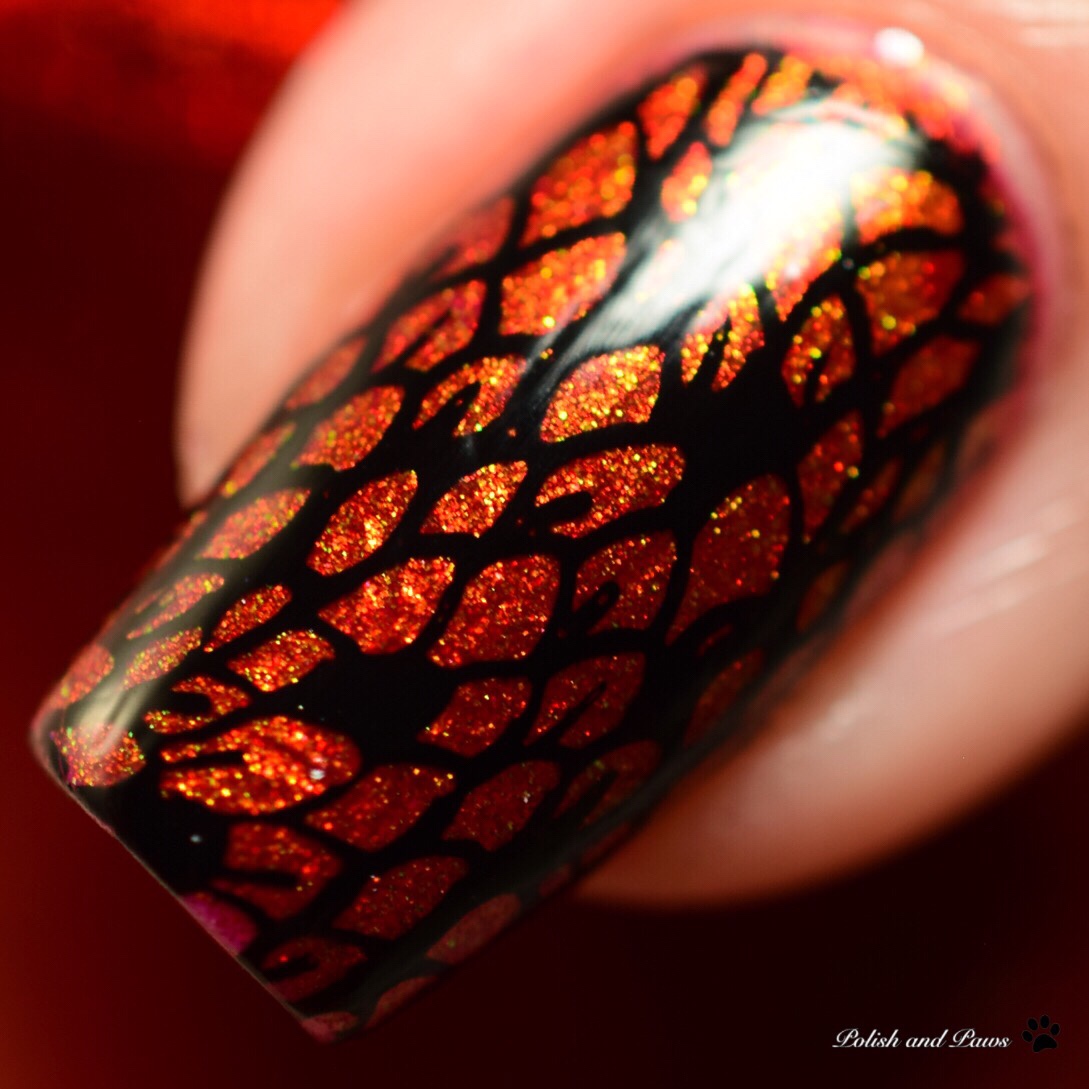 What do you think of my dragon nails? Don’t you just love all the dragons from the Middle Earth movies? Check back tomorrow for my final mythical creature mani!

You can follow The Digital Dozen here on Instagram. My social media links are below. And definitely check out the inlinkz, this group of ladies is so talented, and fun! It really is an honor to be a part of the group. It’s been the highlight of my blogging so far this year.